Downtown Disciples began with a few progressive urbanites, a small grant from the Upper Midwest Region, and a book called Saving Jesus From the Church by Robin Meyers. Debbie Griffin hoped to create safe gathering spaces for people who gave up on Church, were wounded by Church, or just longed for meaningful community. 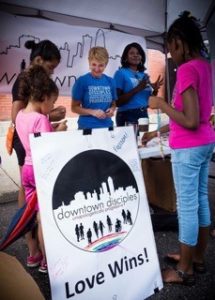 They gathered in the Downtown Des Moines Social Club, a historic firehouse renovated into a funky urban social space (and it was free!) From the beginning they called themselves Downtown Disciples: Unapologetically Progressive, hoping the name would appeal to people who don’t fit into mainstream church, but are passionate about social justice and curious about Jesus. In true Disciple fashion, Pastor Debbie wanted the community to create itself organically but she established a few core values as their foundation. 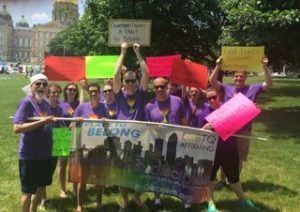 Every week you’ll find them rallying for fair wages, serving the homeless and elderly, holding their elected officials accountable, proclaiming #BlackLivesMatter and worshiping with body, mind and soul.

The one place you won’t find these unapologetically progressive Disciples is in a building they’ve built or purchased. You can partner with them in ministry and learn more about this old new way of being church at www.downtowndisciples.org