The Disciples of Christ presence in Naples, FL, is much different today: 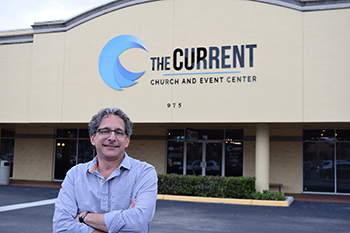 The changes, says the Rev. Michael Junkroski, have been a long time coming. After months of study and discussion, led in part by the congregation’s use of the New Beginning project led by Hope Partnership, the congregation in 2011 sold its building on Mandarin Road to the Chabad Jewish Center. Over the next four years, the congregation worshipped in rented space, first in a school and then in a ballet studio.

While using the rented space was satisfactory, the demand on the congregation’s food pantry began to grow – and it was a challenge trying to communicate the changing locations when the pantry was open. The pantry has grown from serving 50 people a month to 3,000 a month.

“We discovered we had a ministry that would be better served in our own space,” Rev. Junkroski recalls. After a lengthy search, church leaders found the former piano gallery. Ironically, Rev. Junkroski is a professional musician and also had been a friend of the gallery’s owner.

Using some of the proceeds from the sale of the Mandarin Road property, the congregation was able to pay for the piano gallery in full, cover remodeling costs and furnish the new space. Money left over is invested with the Christian Church Foundation, providing an endowment-like stream of income.

The church’s open space serves as both worship area and classroom; on the other side of a curtain is work area and space for children’s programming. After renovations, there will be separate spaces for classrooms, meeting areas, worship, offices and storage. The food pantry occupies a separate room with its own entrance for receiving food and pantry guests. In addition to Sunday worship, the facility is used three or four nights every week by groups.

Rev. Junkroski, who joined the church staff in 2008 as a musician, says the new environment – called The Current — is attracting younger worshippers. They also are wrestling with issues of faith, and come with a desire to be engaged in conversation and mission.

The church provides “progressive thinking in a pretty conservative town,” said Rev. Junkroski, who became the church’s pastor in 2012.

First Christian also is pleased to have New Day Metropolitan Community Church share space in The Current, and Rev. Junkroski envisions the day when the facility can be rented for events. Although the church is debt-free, it can use the extra income. Rev. Junkroski admits there is a challenge of growing a new generation of financial stewards. “Giving to the church is not yet a priority with the younger generation.”

In the meantime, the congregation continues to do ministry, albeit in different ways than in years past. And Rev. Junkroski appreciates the resources offered by Hope Partnership, Disciples Church Extension Fund and the Christian Church Foundation. “The support and resources these ministries provide have been essential as we have moved forward,” he said.