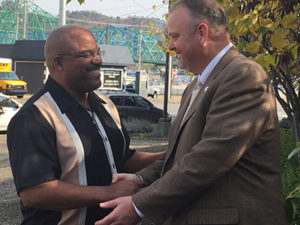 Racism rears its ugly head everywhere, but in along the Ohio river, two congregations and their pastors are doing their part to build some community understanding. When the Ashland (KY) NAACP chapter approached city leaders to work on the issue of racism in the town of about 21,000, New Hope Missionary Baptist’s Rev. Stanley McDonald and First Christian’s Rev. Isaac “Ike” Nicholson were invited to appear at their first Community Dialogue Action Meeting on Unity in August.

Nicholson, who identifies as white, said, “We all know each other. This is a predominately white town – only about 3.5 percent of the city is African American. The NAACP and Human Rights Commission wanted two churches to partner with their dialogue efforts so they invited [McDonald] and me.”

Though the town has had no overt violent acts of racism thus far, the NAACP had the foresight to realize it would be wise to get conversations going given the incidents in the rest of the United States. By August they had their first event.

More than 30 of the 90 minutes allocated focused on how communities of faith are essential to facilitating community dialogue and goodwill. Following the event, the NAACP and Human Rights Commission approached McDonald and Nicholson to host a second event.

Nicholson was aware of the importance of these conversations from his experience in the Capital Area region where his previous church was partnered with an African American congregation, Shepherd Park Christian Church led by Rev. Marcus Leathers. (Leathers has also been a trainer with Reconciliation Ministry.)

“When [McDonald] and I went to the local restaurant to have our first meeting, I noticed how every head in the restaurant followed us,” Nicholson said. McDonald answered Nicholson’s questions frankly about how it feels to be the only minority individual in a group. The professional colleagues have become friends, sharing dinner with their spouses.

“Each constituent from the first dialogue is hoping and praying and working toward supporting this partnership,” Nicholson said. Plans include a joint spring activity in the community for the city, schools and other groups involved.

There has been push back from some in town, but another predominately white church has asked to join the effort, feeding the NAACP’s original idea of mobilizing the faith community to get behind New Hope’s leadership.

On Nov. 18, the congregations are doing just that. Their list of speakers includes the mayor, chief of police, superintendent of schools, NAACP’s president, a member of the Human Rights Commission, a diversity officer from the local community college, the editor of the daily newspaper as moderator and the two pastors. All were partners in the first dialogue.

“If people will just commit to listening to what is going on with other parts of the community, to actively and with intention listen, we can start to build understanding,” said Nicholson.