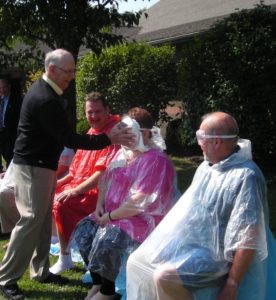 “I knew they were capable of doing great things, so I challenged them. I wanted them to understand that they can exceed their own expectations. This was an important lesson for the church to learn as we are praying for God to show us how we can make an impact in our community through serving our neighbors,” said Pastor Tracy Siegman. She does this in memory of Harold Harmison, a mentor and lay pastor from Illinois, who set the example of challenging congregations.

In celebration of their achievement, the church enjoyed a pie fellowship following the service on Sunday, September 17, 2017 during which Pastor Tracy, Martin, and Larry received 2 pies each in the face.