The gifts and graces from the Christian Church (Disciples of Christ) in all its expressions are making a difference in our world.

This message came to the foreground in March when two different Global Mission partners talked about the important work being done – thanks to Disciples – in their respective regions of the globe. The work they described is made possible through vital partnerships at every level of our church — local congregations, regions, Texas Christian University, and Division of Overseas Ministries/Global Ministries and the Christian Church Foundation working together, and most importantly, generous donors inspired to share their resources to help spread the Gospel to the ends of the earth. 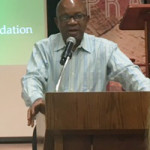 The Rev. Pam Holt, regional Minister of Oklahoma, and Janet Helm, executive director of Disciples4Water, also attended, representing the power of our church partnerships. It was just last summer when Global Ministries celebrated the signing of the partnership agreement between the Community of Disciples of Christ in Congo (CDCC) and Disciples4Water (a ministry of the First Christian Church, Edmond, OK), at the General Assembly.  Rev. Bonanga represented Congolese Disciples and signed this partnership agreement. 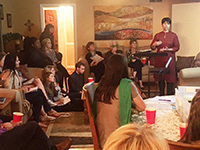 Gayatri Ganesh, director of development at the Christian Hospital in Mungeli, India, discusses the hospital’s work during a visit in March to Fort Worth, Texas.

The exciting work of the Christian Hospital in Mungeli, India, was the focus as about 30 people – TCU students as well as members from University Christian Church — gathered in a home in Fort Worth, Texas, to hear Gayatri Ganesh, the hospital’s director of development. The hospital (www.chmungeli.org), owned by the Church of North India, serves the rural and urban population that come from a radius of about 50 miles around Mungeli, a small town situated in the state of Chattisgarh.

The hospital runs the Rambo Memorial English School – an English language school for the common people at a subsidized rate, with classes from nursery to grade 12. It has about 900 children and brings in children from the surrounding villages.

The hospital also started a nursing school, which is now ready to take in the third class and focuses on training young girls at a very low cost and subsidized by the hospital. Those listening to the presentation included about 20 nursing students from TCU. The students’ professors, Diane Hawley and  Sharon Caclini, had visited the hospital three years ago, returning inspired by the work they witnessed.

Last year, Paige Rauterkus, a 2015 graduate of TCU’s Harris College of Nursing, spent six months as a long-term volunteer at Christian Hospital.  She hopes to return later this year, possibly accompanied by other TCU nursing students who were at the meeting to hear Ganesh’s stories.

I came away from these two experiences – hearing stories about vital mission work being done on our behalf in the Congo and India – with a renewed sense of excitement about the partnerships across the life of the church.  Laypersons from Central in Enid and University Christian in Fort Worth are excited about visiting these Global Mission partners in the Congo and Mungeli, India, and supporting the exciting work that is taking place.  And, I am able to see firsthand the impact that endowed funds at the Christian Church Foundation have in supporting these mission efforts, transforming lives and making a difference in the world.