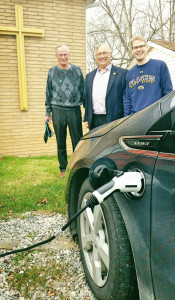 Lorenzo Thomas, OSL, says, “Anyone looking in at our church from the outside would think that we’re too small, too poor, too busy ministering to the people of our community to make sustainability a major project for us. The fact is, and we are living proof that sustainability is affordable, it’s often profitable, and, done in an attitude of prayer, it’s a conduit of God’s grace!”

Bolindale Christian Church in Warren, OH averages 30-some in worship on any given Sunday, but the congregation is making an impact both in their community and on the environment. Though they operate a local food pantry serving 60-70 families twice a month (recently honored by the local Rotary Club) and a GED program, they wanted to also be an example of environmental sustainability as well.

Thomas, a member of the Order of St. Luke, and Pastor Ray Blasko are both students at the Methodist Theological School in Ohio which has made sustainability to the glory of God a key element in pastoral formation. Blasko is an electrical engineer by trade and, as Thomas puts it, “lives and moves and has his being in the cutting edge of electric power and sustainability” at Delphi Electric, a company that builds efficient batteries, charging mechanisms and power supplies for automobiles.

When Blasko purchased an electric car, the pair got the idea to put a charging port at the church. According to Thomas, “One drill hole and some caulking later and we were the brand new operators of Youngstown/Warren’s first public car charging port!” Converter units are $300-$500 dollars. Church treasurer and elder Chuck Mackey says the rate is about 10 cents per hour of charge time and they have yet to see a 25 cent difference per month because of the car.

Blasko said, “As far as cost, it only takes 85 cents to ‘fill up’ my car with electricity and I rarely charge the car all the way up. Because of other savings we’ve realized by using LED/CFL lights and automatic switches that go off on their own, our electric bill has not substantially changed even though the electric company has had a rate increase since installing the charger.” Blasko does not turn in his car mileage for reimbursement. He continues, “My treasurer still kids me every chance he gets that he’s going to put a quarter machine on the charge station to get something back from me.”

But there is more to the effort than convenience for the pastor. Blasko says, “Overall, having the electric car and the charge station at the church has been great not just because I can charge up, but because it really gets the church members thinking about the future and feeling like they’re part of that now. Plus my kids, teens, and especially young adults think it is ‘very cool’!”