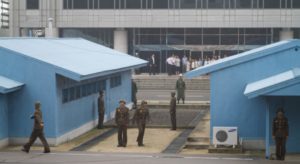 The demilitarized zone between North and South Korea is one of the most heavily guarded in the world.

When North Korea tests another warhead, our sisters and brothers in South Korea shudder. Though it has been 63 years since the armistice was signed, the Korean Peninsula remains starkly divided. Families separated for seven decades rarely have opportunities to communicate and sanctions prevent even medicine from being sent to the north. Disciples have spoken out through both the 2015 General Assembly resolution on reunification (GA-1522) and more recently in a letter to the current U.S. administration opposing further deployment of weapons in the south.

Recently a delegation from the National Council of Churches in Korea visited Disciples Center on July 25 and National Council of Churches (Facebook video from July 28, 11 am EDT) in an effort to garner support for their efforts to broker a peace treaty. They have worked for more than 5 years in partnership with Christians in the northern provinces to come up with concrete suggestions for reunification. They were scheduled to visit the White House July 28 to make their case to the administration.

Individuals and faith communities can help by 1) educating themselves on the issues starting with the resolution and letter referenced above; 2) be in touch with congressional representatives and senators  and share your thoughts and 3) encourage the United Nations Security Council (U.S. contact form) to work toward peace building as opposed to maintaining the current situation. The World Council of Churches also advocates for the people on the Korean peninsula.