In March 2016, Global Ministries of the Christian Church (Disciples of Christ) and the United Church of Christ led a delegation of church leaders to the Middle East to meet ministry partners there. Disciples Mission Fund and Week of Compassion support these partners and many others in the land where Jesus and the apostles first walked and where their descendants still live today. 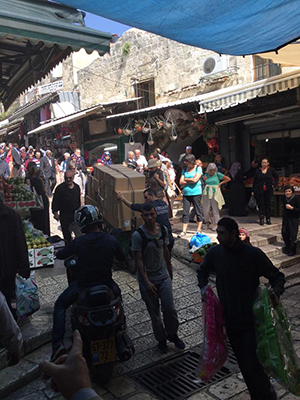 We were rushing through Jerusalem’s Old City on the way to our next appointment. In the midst of the market’s narrow streets – surrounded by beautiful Arabic clothing and scarves, Palestinian art and handiwork, pomegranate juicers and pungent spices – we heard the strains of “Were you there when they crucified my Lord?” Foot traffic slowed to a near stop as a group of American pilgrims made their Lenten journey up the Via Dolorosa, complete with cross. I hummed along and waited for my chance to slip around the outstretched cross-beam and be on my way.

The sermon begging to be preached about trying to “slip around the cross” was not lost on me. Lent is a powerful and thought-provoking time for a Christian to be in the land called “holy” for three monotheistic religions.

In the Gospel according to Luke, Jesus begins his ministry announcing his call to “preach good news to the poor.” (Luke 4:18) In Matthew, near the end of this ministry, Jesus, declares that “the nations” will be judged on how they treat the hungry, thirsty, stranger, naked, sick and imprisoned – judged as if each of those needy persons were Jesus himself. (Matthew 25:31-46)

In today’s Middle East – at least in the places where I recently traveled: Egypt, Lebanon, Jordan and the West Bank – there are many who fit the Matthew 25 description: 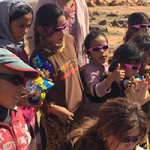 Coloring the desert with toys for refugees

And yet, our partners have not given up; so how can we? Riad Jourjour in Beirut has assembled trainers who teach Syrians peace-building and decision-making across religious lines – for a post-war Syria they know will come one day. Mitri Raheb has created a cultural oasis in the midst of the occupation where art and joy and life blossom barely out of sight of military check points. Wafa Goussouss “colors the desert” with toys for children, dignity packets for women, supplies for a community of refugees living in tents on the Jordanian side of the Syrian border. The YMCA in Bethlehem treats children with PTSD and restores them to the child their mother once knew. The YWCA in Jerusalem oversees a kindergarten in a refugee camp where 5 year olds sing and learn the alphabet and laugh the sweet laugh of children. 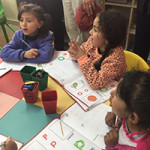 For 10 packed days, we met partners in God’s work of healing and hope and wholeness. All of them showed us a cross – of poverty, war, extremism, uprootedness – but all of them also showed us a lived faith in what comes beyond the cross – a resurrection, a blooming desert, a region living in justice and peace. In order for that time to come, each one makes a daily choice – to stay, to witness for justice, to build paths of wholeness. In this Lenten season, our Global Ministry partners in the Middle East teach us about the reality of Lent and the hope of Resurrection and about staying on the journey even when that way includes a cross. I’m humbled by their faithful witness.