They brought us coffee. The thick Turkish kind that gets stuck in your teeth. One of the young men of the community brought it to where we were standing, talking. We could see him coming with it – a small kettle and cup. One tiny espresso cup. Our interpreter said quietly, “Drink, and if you want more, hand it straight back. If you’re finished, turn your wrist as you hand it back. He’ll know to offer the cup to the next person.” Coffee. One cup. Our host moved from person to person where we stood, offering to us guests the hospitality of the desert. Here in this encampment of Syrian refugees, a cup of coffee was communion. 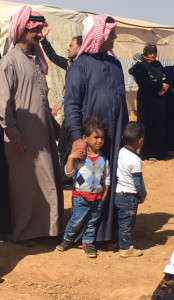 It was generous, too. On this bleak terrain where water had to be bought from a neighboring farm, where sand and dust blew constantly, where the sun beat down unobstructed by tree or shrub. Where people’s possessions included what they could escape carrying, on their way out of Syria.

We thought we had come to serve them. Our group of Disciples and UCC leaders had arrived earlier to this cluster of tents with sacks of cleaning supplies for families, “dignity” packs for women, and candy and colorful sun glasses for the children. We had handed them out – a little awkwardly – was this disaster tourism? Hopefully the relationship of our mission partner guides with the Syrians would cover us, too.

In the end, neither. We stayed long enough and engaged authentically enough, that before we parted, we could share a common table. This Syrian community served us – as guests in their midst.

At Jesus’ last supper with his disciples – the one we celebrate on Maundy Thursday – John reports that Jesus did a surprising thing. He turned servanthood on its head. He took a towel and knelt at his disciples’ feet and washed them. The leader turned servant. They protested at first, but Jesus insisted. This is the way it will be, he said. You should love one another.

Out of that washing of feet came the “new commandment” – of love. Jesus insists on it. Honest love, expressed authentically – whether master washing feet or refugees offering coffee hospitality – such love turns the powers of the world upside down.

A cup of coffee in the desert. Feet washing in an upper room. Gestures of genuine humanity. Offerings of love.

A later disciple of John said, “Perfect love casts out fear.” On this Maundy Thursday, may it be so.

Read more about the group’s visit to the border