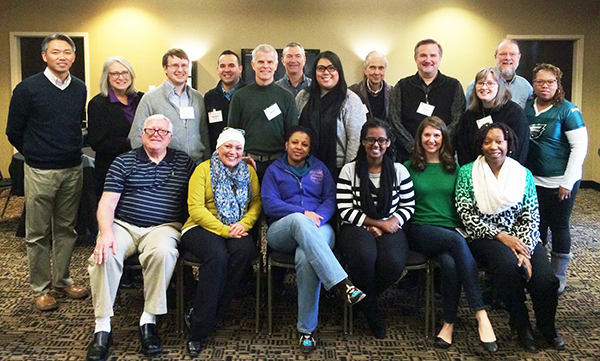 From February 5-7, 2016, 21 members of the Christian Church (Disciples of Christ) met as the Social Witness Task Force in Indianapolis. This group was formed in response to GA-1524 which called for “the Office of General Minister and President, Disciples Home Missions, Division of Overseas Ministries, to convene a balanced broad-based and inclusive task force . . . for the purpose of bringing to the 2017 General Assembly . . . a jointly sponsored process for discussion of and education about important religious, ethical and social issues.”

At the gathering, committee members shared how they understood the role Sense of the Assembly resolutions play in different expressions of ministry, and the impact they have in congregations. Sense of the Assembly resolutions can play a powerful role in supporting the work of international partners in vital ministries and provide congregations with opportunities to discuss and engage in pressing social issues. Various ministries of the church use these resolutions to facilitate and guide their work.

At the same time, Sense of the Assembly resolutions have caused tension in congregations. At times some members have felt that they have had little input in the discussion before the resolution is passed at General Assembly, or that the resolution does not respect their point of view. One member of the group expressed the concern, “We’ve lost a lot people the last few years, and I just started thinking when is it going to stop? Are we going to lose more folks the next time some resolution passes?”

The Task Force will continue working over the next several months in order to meet the guidelines of GA-1524 by:

Please pray with the Social Witness Task Force as they work to discern a process that will help the church to hold unity and justice in a mutually reinforcing way that allows the Christian Church (Disciples of Christ) to involve the depth and breadth of the church in its witness for wholeness and justice.