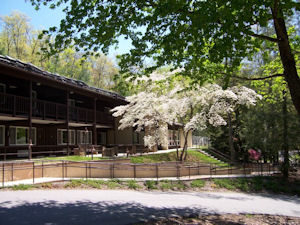 Christmount was founded in 1948 as the retreat grounds for the Christian Church (Disciples of Christ). Since its beginnings, Christmount has been closely related to the Disciples, reporting to the General Board through Disciples Home Missions, with whom it has a covenantal relationship. Christmount receives some funding from Disciples Mission Fund. The DHM Board has met at Christmount several times, and other ministries have held retreats here. Christmount is used by the Southeastern Regional Fellowship (SERF) staffs for their annual retreat; SERF Disciples Women and  meet regularly.

The Christmount Administrative Board is pleased to announce that it has extended a call to the Rev. Rob Morris to serve as the Executive Director beginning July 5, 2016.

He is an ordained minister of the Christian Church (Disciples of Christ). He earned his MDiv at Duke Divinity School and Bachelor of Arts at Texas Christian University.

Christmount, in the ecumenical spirit of Disciples, welcomes Christians of all denominations. The Western NC Episcopal Cursillo meets twice a year; a Walk to Emmaus retreat was held for several years; and Methodist Christian Educators and Professional Secretaries have held retreats from time to time. Christmount has seen an increase in the number of Hispanic church groups, youth and adults, in recent years as well. Christmount is building relationships with Cooperative Baptists and Alliance of Baptists as well.

In 2010, Christmount started Camp Lakey Gap for people on the autism spectrum. Each summer, a staff is hired and trained to work with both youth and adults on the spectrum, and the reputation of the camp’s excellence is growing, especially in the Southeast. Camp Staff is drawn from college students across the country. Campers come from the entire east coast and include some Disciples.

In 2016, Christmount is sponsoring over 40 camps, conferences, and retreats for adults and youth. Mission opportunities abound for youth, college, and adult groups.

Christmount has two year-round hotels with 31 rooms and a sabbatical apartment, available to Disciples ministers at a special rate. There is a 32-bed year-round lodge, plus camper cabins and an older dormitory. Two family cottages sleep up to six people and are available most of the year.

Christmount’s mission is to provide Christian hospitality, rest for the soul, and renewal for the journey.