2 Then the Lord answered me and said:
Write the vision;
make it plain on tablets,
so that a runner may read it.
3 For there is still a vision for the appointed time;
it speaks of the end, and does not lie.
If it seems to tarry, wait for it;
it will surely come, it will not delay. Habakkuk 2:2-3 (NRSV)

With a theme of “Hindsight s Insight s Foresight” participants of the National Convocation’s Biennial Session scanned history and the present for keys to their future. A new reprint of the 1990 history book, Journey Toward Wholeness, was presented as well as a renewed commitment to educating the Church about the historic 1968-71 Merger Agreement between the predecessor organization, the National Christian Missionary Convention, and the General Assembly’s predecessor, the International Convention and the United Christian Missionary Society of the Christian Church. (E-mail for information on obtaining a book.)

The overview of the present situation included the topics of recent deaths of African-Americans in encounters with law enforcement, but also systemic issues that affect families, such as mass incarceration, poverty and other issues that disproportionately afflict people of color. And from the general Church, a report on eliminating racist language from governing documents (GB-16-0977) is now available for review.

And in a look to the future, preachers exhorted participants to be agents of reconciliation, peace and action. Calls to renew support of the existing Reconciliation Ministry also included calls to individuals to be active and activists in their own communities.  In addition, more than 100 participants experienced a Mission First! Mission Gathering to give their ideas for the direction of the Christian Church (Disciples of Christ).

A showing of the documentary Injustice Anywhere and a panel discussion of church leaders led by Rev. Dietra Wise Baker was a feature of Friday afternoon’s learning opportunities. The film, produced by a member of Liberation Church in the St. Louis area, incorporates several Disciple responses to the unrest in Ferguson, MO, in late 2014 and 2015 in response to the death of Michael Brown on Aug. 9, 2014. The National Benevolent Association, based in St. Louis, hosts the study materials and video for this effort. 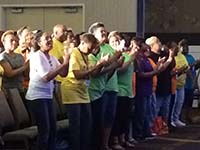 In addition to the frank discussions of the issues faced particularly by African Americans and the differences between generational approaches, traditional elements of the Biennial Session were celebrated. The T-shirt & Jeans service Friday night featured leadership among the youth. The Generations Banquet on Saturday evening was awash in colors as each generation wore their own color from purple and green to white and red. And, of course, the music and preaching was powerful.

Honors were extended, particularly the Liberation Awards on Saturday evening. Rev. Dietra Wise Baker of St. Louis who has been a leader in the Ferguson response, was a recipient as well as Rev. April Johnson of the Disciples of Christ’s Reconciliation Ministry. 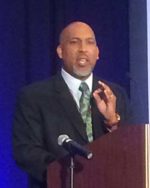 On Sunday morning, though Congressman Emanuel Cleaver was scheduled, his duties for the Democratic National Convention prevented him from joining the session. Instead, the senior pastor from Kansas City’s Central Christian Church, Rev. Antoine Lee, reminded the congregation that “God has faith in us to be who God called us to be.”

New officers for the National Convocation were installed and include: Patricia Pendleton, president; Donald Gillette, vice president; Ed Cushingberry, secretary; Gloria Gilliard, treasurer; and board members Milton Bowens, Perry Spencer, Jr., Ken Brooker-Langston and Delessyn Kennebrew. And waiting in the wings for the 2018-2020 board are Gillette as president-elect; Irie Session as vice president; Pamela Dubose as secretary; and James Vertreese as treasurer. 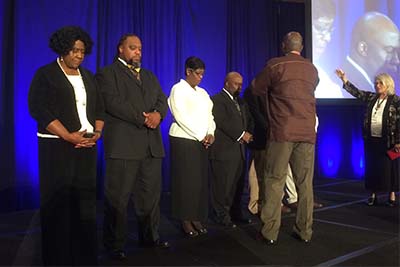