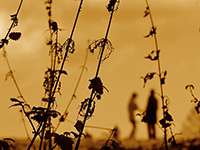 Last spring I walked across the Edmund Pettis Bridge in Selma with other Disciples – a racially mixed group crossing together.

Through the brave struggle of the Civil Rights movement in the 1960’s, led by the Rev. Dr. Martin Luther King, Jr. and many others, the segregated lunch counters and drinking fountains and restrooms went away. Voting rights legislation was put into place.

A lot has been accomplished – but… have you ever had a weed grow in your yard, and you cut it off and everything looked great? For a while. But you didn’t get the roots… and – It. Grew. Back.

A little black boy, adopted by white parents, shops with his mom but a little ways away from her. A clerk follows him suspiciously until the boy calls out to his mother, “How do you like this shirt, MOM?” And the clerk relaxes as the mom’s whiteness covers the little boy – for now.

And the deepest part of the racism here is that it requires the validation by that white mom to assure other white people of what all people of color already know – 50 years after Selma and the Civil Rights Act and the Voting Rights Act, racism is real.

And the reality of racism goes much deeper than the misguided prejudice of this clerk or that disbelieving white person.

Racism is more than just individual race prejudice. Statistics show us that racism is system-wide – in our institutions as well as people. We see it in the mass incarceration of people of color; the justice department report on Ferguson’s police targeting African Americans in a fund-raising scheme. We see it in the lagging social indicators for people of color in income, net worth, education, jobs, in the strategies that make it harder for people of color to vote or in gerrymandering that leads to under-representation in government.

In these years since 1960, we’ve also had signs of hope – an African American president elected!! The whole country rejoiced. But in spite of that election or maybe in part because of it – and the resulting backlash – we see that in 2016, the job is not done. Racism is still real.

We see it, in part, because of the ever-present availability of video recordings to put things out in the open that once were secret.

We see that racism is real, in part because a generation of young people are speaking up who didn’t live the “before and after” of the 60’s. These young people see the now and are pointing out that the weed has not only poked its head above ground, it has taken quite a growth spurt. These young people are determined to do something about it… They’re not likely to stop until they know for sure that Black Lives do Matter – as do all others.

And not just individual sin; racism has rightly been called America’s original sin – created to justify the brutal enslavement of human beings but persisting beyond the formal end of slavery and Jim Crow.

Racism goes beyond what I do or you do. It is something we are born into in the United States reality. And for those of us who are white, it benefits us whether we know it or not, whether we intend it or not.

Our Disciples general assembly passed a resolution last summer against “environmental racism.” The poisonous by-products of our prosperous economy have to go somewhere and most often they are deposited near to people of color.

I did not personally put that environmental poison in my across-the-town neighbor’s back yard. I don’t want to be held morally accountable for something I didn’t sit at the table to plan – but that’s the point of original sin. It’s not about what white individuals do to our black or brown neighbor. It’s a pattern we’re born into where people of color are treated differently than white people. It’s a system that white people benefit from even though we did not ask for it. We just get the benefit, and it keeps our neighbor down. We drink clean water and our neighbors in Flint, Michigan drink lead.

Racism is real; racism is sin; and racism is really, really tough. If we’re going to get beyond it, none of us gets to sit on the sidelines.

It’s in everybody’s self-interest to get involved. Because – the truth is – racism hurts all. Even those who benefit. A full cost-benefit analysis shows that racism causes white people to lose, too.

When we think of all the scientific and medical contributions of black and brown people to our well-being today – we can only wonder what those who were tortured in slavery or who are currently wasting away in prison might have contributed to the greater good.

When we think of the energy that goes to holding down a whole class of people (unnecessary, unjust laws; militarized police forces; more and more prisons) – energy that could instead go to building up our common life together on this planet – the loss to us all through the sin of racism is huge.

Racism is tough to overcome, though. It will take us all, working together, each doing our own part.

Because racism is real, let’s admit it and have the conversation.

Because racism is sin, let’s those of us who benefit repent.

Because racism is tough, let’s join the struggle together.

Genesis describes that from the very beginning of creation, God created the whole human family to be one – beautifully diverse, multiply talented, but one human family.

In Isaiah, we see the world described as God dreams it: A world of “shalom” – where the wolf lies down with the lamb, where children play in safety, where God wipes away all tears.

Shalom, envisioned by Dr. Martin Luther King, Jr. as the beloved community, a community where there is liberty and justice for all, where the harmonies of liberty unite us.

Building that community is our calling, with the help of God. We’ve got a lot of work to do to root out racism. Let’s get at it – together.

Link to audio of a longer version of this piece from the Remind & Renew conference at Phillips Theological Seminary in January 2016.