From the introduction to Preaching Politics: Proclaiming Jesus in an Age of Money, Power, and Partisanship by Clay Stauffer: 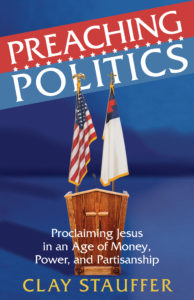 Shortly before this book went to press, I sat down at a coffee shop close to my church with a seasoned politician whom I respect despite the fact that we don’t always see eye to eye on every issue. He is older than I am and has seen more than his share of stump speeches, sermons, elections, political pandering, and partisan games. He also seems to respect me regardless of my relative youth and our differences on politics, faith, social policy, and the like. But we each share a love of this great nation, our home state of Tennessee, and the city of Nashville. And we each love our coffee, prepared differently, of course. On this occasion we had another civil conversation—one that included the purpose and intent of this book.

“Clay, I don’t know why you would want to write a book about preaching politics,” he said. “I’ve always considered what you do to be above the political fray, a much more noble profession than mine. Why would you want to dive into the swamp? It doesn’t seem necessary. I just don’t want you to regret this later in your life.”

His observation caught me off guard at 6:45 in the morning. I was still waking up. And to be honest, what he said rattled me. Why do I want to talk about the potential pitfalls of preaching politics? Why do I want to “dirty myself” in the realm of politicians who have low-digit approval ratings? Why would I want to open Pandora’s Box and unleash the howls of those who say politics has no place in the pulpit? Shouldn’t ministers of the gospel play it safe and stay as far away from politics as possible? Aren’t millennials staying away from the church because they believe it is too political? Haven’t preachers on both ends of the spectrum managed to offend enough people and do enough damage already?

My response to these questions has its roots in the denominational ethos that I grew up in and in which I now minister. At thirty-five years of age, I am in my ninth year as senior minister of Woodmont Christian Church (Disciples of Christ). I am also a fourth-generation pastor, following my father, grandfather, and great-grandfather. In the Stone Campbell tradition that gave birth to my denomination, we say that we “agree to disagree” when it comes to controversial issues that tend to divide Christians. We stress the unity of Christ’s church and seek to maintain it. “In essentials, unity; in nonessentials, liberty; but in all things love.” That’s our mantra. This is what we strive to live out in our local churches.

And yet, throughout my adult life, I have watched the church argue, fight, and, in many cases, tear itself apart over a variety of issues. How many issues are there in American society that can be debated eternally without either side conceding an inch of moral high ground? As we prepare for another heated presidential race, many theologians and preachers will endorse a variety of candidates and stake their partisan positions. …

This book is not about any single political issue but rather about how we debate any political issue, and the potential divisions and stressors that pastors and preachers face on a regular basis. Our congregations are split along political, social, and moral lines. Often the moral is wrapped up in the political, and the politics lead to certain perceptions of one another’s theological and biblical beliefs. Some people and churches feel that their version of Christianity is superior. Furthermore, obvious divisions related to socioeconomic class and lifestyle differences are also a reality for many churches. Growing materialism, the glorification of money, rampant consumerism, the constant quest for more, and a false sense of security present real challenges to our spiritual lives and the church of the future. As I will contend, Jesus still speaks to all these things.

Civil dialogue and mutual respect are absolutely necessary if a united church is to have a future.