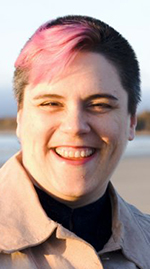 he Christian Church in Canada welcomes the Rev. Dr. Jen Garbin as the new regional minister. Garbin will begin June 1, 2016. She comes from her current position as senior pastor of one of Canada’s new congregations in formation, Sugarbush Christian Church (DOC), located in Guelph, Ontario.

Garbin has served on area and regional boards and committees as well as the General Board of the Christian Church (Disciples of Christ) in the United States and Canada. She is actively involved in the Ontario Area’s camping program and OCYF as a director and adult advisor.

Ordained 10 years ago, Garbin has served congregations in Nova Scotia and Ontario. She earned her MDiv and DMin from Emmanuel College (Toronto School of Theology, University of Toronto).

Garbin says, “I’m a total church nerd and I believe whole-heartedly that although the church in Canada is changing, we are on the edge of something incredible, an opportunity to not only transform the world around us, but be ourselves transformed.”

Garbin is married to Gianni Garbin and they have two children, Rita and Victor.