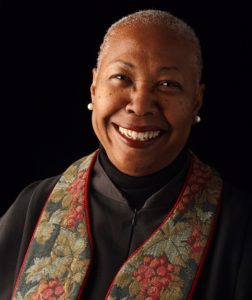 On February 4, 2017, the Board of the Central Rocky Mountain Region unanimously voted to call the Rev. Joan Bell-Haynes to serve as its Executive Regional Minister. Bell-Haynes comes to the CRMR from United Christian Parish of Reston, an ecumenical congregation comprised of four denominations, where she has served since 2005 as co-pastor.

Bell-Haynes is an alumna of the Disciples Divinity House and the University of Chicago Divinity School. She is an ordained minister in the Christian Church (Disciples of Christ). After earning her undergraduate degree in psychology from Albany State College (Albany, GA) she worked as assistant dean of academics in the College of Health Sciences at Georgia State University in Atlanta, GA.

Bell-Haynes is devoted to the Christian Church (Disciples of Christ) and has an extensive record of service in all expressions of the church. She served as first vice moderator of the General Assembly and as secretary of the National Convocation. She has also served on the board of the Christian Church Foundation and Disciples Church Extension Fund.

She brings vital leadership experience in bridge-building as one who loves all God’s people. She is an ecumenist at heart and an interfaith partner with the Jewish, Muslim, Buddhist, Catholic, and Sikh communities. Bell-Haynes was the 2017 co-recipient of the Christian Church Capital Area Bridge Builder Award.