In this contentious campaign season, we write as leaders who have witnessed firsthand the prophecy of our Lord that “five in one household will be divided, three against two and two against three;” (Luke 12:52 NRSV). In a week when we have gathered to confer about the spiritual health of our church, both sides of America’s divided family have called one another racist. As a body that has claimed a pro-reconciliation, anti-racist priority for two decades, we the Christian Church (Disciples of Christ) in the United States and Canada write to offer a word of hope from our experience.

First we offer reflections on some of the more difficult learnings of these past two decades.

As faith leaders, we look back on the history of the United States and Canada, and we see that we have too often been on the wrong side of history with regard to public policy. Too many of us were wrong on slavery. Too many were wrong on Jim Crow. Too many were wrong on residential schools for indigenous children, and too often we have turned our backs on treaties with indigenous brothers and sisters.  When we said nothing about such policies, we supported the status quo by default. Then and now, however, the voice of God calls us to bring our faith to participate actively in shaping public policy, “Ah, you who make iniquitous decrees, who write oppressive statutes, to turn aside the needy from justice and to rob the poor of my people of their right, that widows may be your spoil, and that you may make the orphans your prey!” (Isaiah 10:1-2 NRSV) Our faith has political implications.

A serious reckoning with the ministry of Jesus compels us to embrace not a politics of left or right or Democratic or Republican parties, but to further God’s politics as best we can determine it. Jesus directed us to pray for God’s kingdom to come here on earth as it is in heaven. Jesus gave us our public policy directive in his first address, as told in Luke 4:18: “The Spirit of the Lord is upon me, because he has anointed me to bring good news to the poor. He has sent me to proclaim release to the captives and recovery of sight to the blind, to let the oppressed go free.” (NRSV)

Our experience has shown us that racism is embedded in public policies and systems, favoring some people and discriminating against others. This “institutional racism” creates inequities between the poor and rich, those with health care and those without, those who are welcome in our country and those who are not, those who face disparity in the criminal justice system and those who do not, those with access to good education and those who lack it. In health care, voting rights, education, criminal justice, immigration policy, and housing, we have a responsibility to name structural inequities, to join with others in the public square who are seeking the good of the whole, and to work for moral policy that roots out racism from our common life.

Jesus not only endorsed policies that would ensure liberty and justice for all. He also moved among the people who were made poor by systemic inequality, offering healing and value to all. Jesus broke bread with people from all walks of life and intentionally developed relationships across the dividing lines of race, gender and nationality. Jesus invited people into diverse, beloved community where they could learn to face their own implicit bias and heal from the hatred that had been sown in their own hearts.

To follow Jesus in North America today is to both advocate for anti-racist public policy and actively seek to build community across the dividing lines of race and class in our communities. Our call as people of faith is to pave the way for public justice by becoming the kind of community we pray and work for in society. The values that undergird this two-fold ministry of public witness and life together include love, justice, compassion, mercy, grace, hospitality to strangers and prophetic challenge in the face of injustice. Jesus called these things the “weightier matters of the law” (Matt.23:23 NRSV).

As Rev. Dr. Martin Luther King, Jr. said half a century ago, “we as a nation need to undergo a radical revolution of values.” Rev. King insisted then that it was time to break the silence about the injustices in society. The truth must be told, he said.

The truth must still be told. We challenge every sitting politician and candidate for public office, and we challenge ourselves: this is not about party politics. It is about redeeming the soul of our two nations.

Sisters and brothers, it matters how we talk about these things. Our words and tone will resonate beyond this particular political season. We choose today whether we will speak from a place of mutual respect and care for each other and value for the establishment of justice, the common good and equal protection under the law in our life together, or whether we will choose to side with likeminded friends and family, “three against two and two against three” in a fight to societal devastation.

Two ways are laid out before us: one that leads to destruction and another that leads to life. For two decades, our church has tried to walk the narrow way of anti-racist community building and public witness. It has not been easy, and we are still striving to go deeper and become more just in our own church life, but we write to testify from our experience that this way leads to life. We pray in these difficult days that we will continue to have the courage to walk together in the way toward liberty and justice for all.

Regional Ministers and Moderators of the Christian Church (Disciples of Christ) in the United States and Canada, meeting in Indianapolis, August 25-26, 2016. 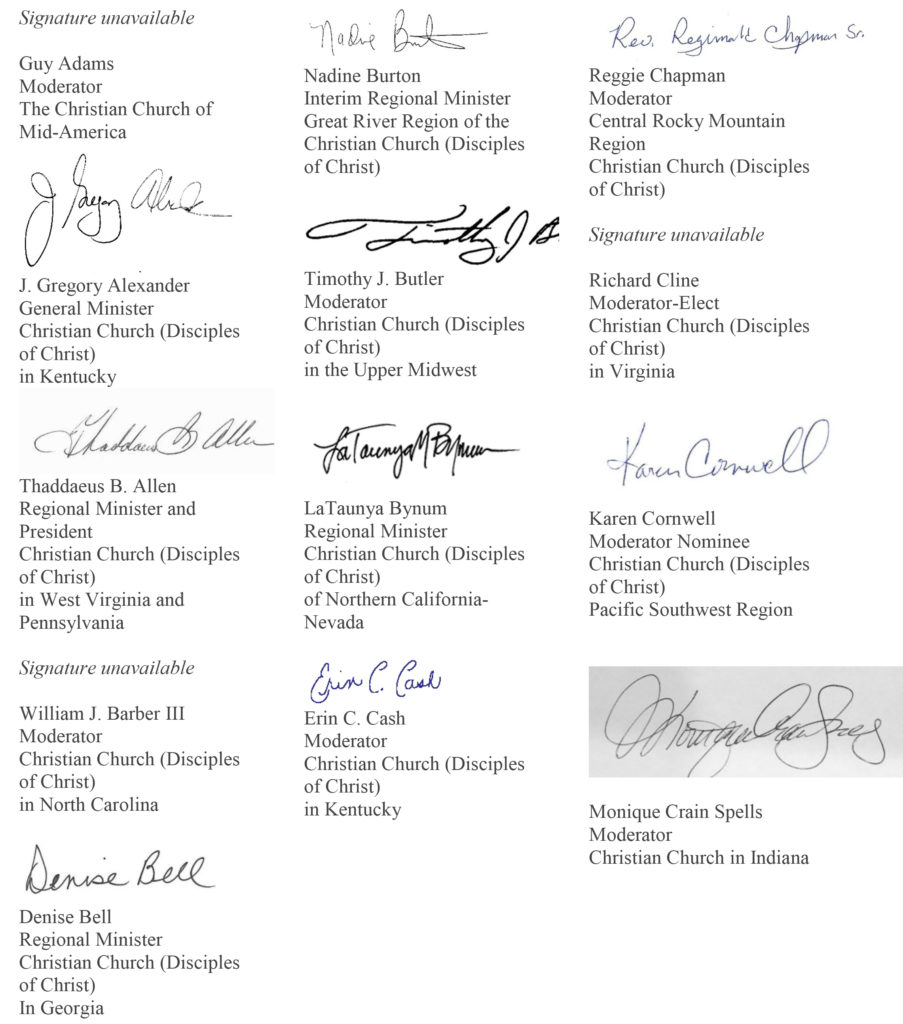 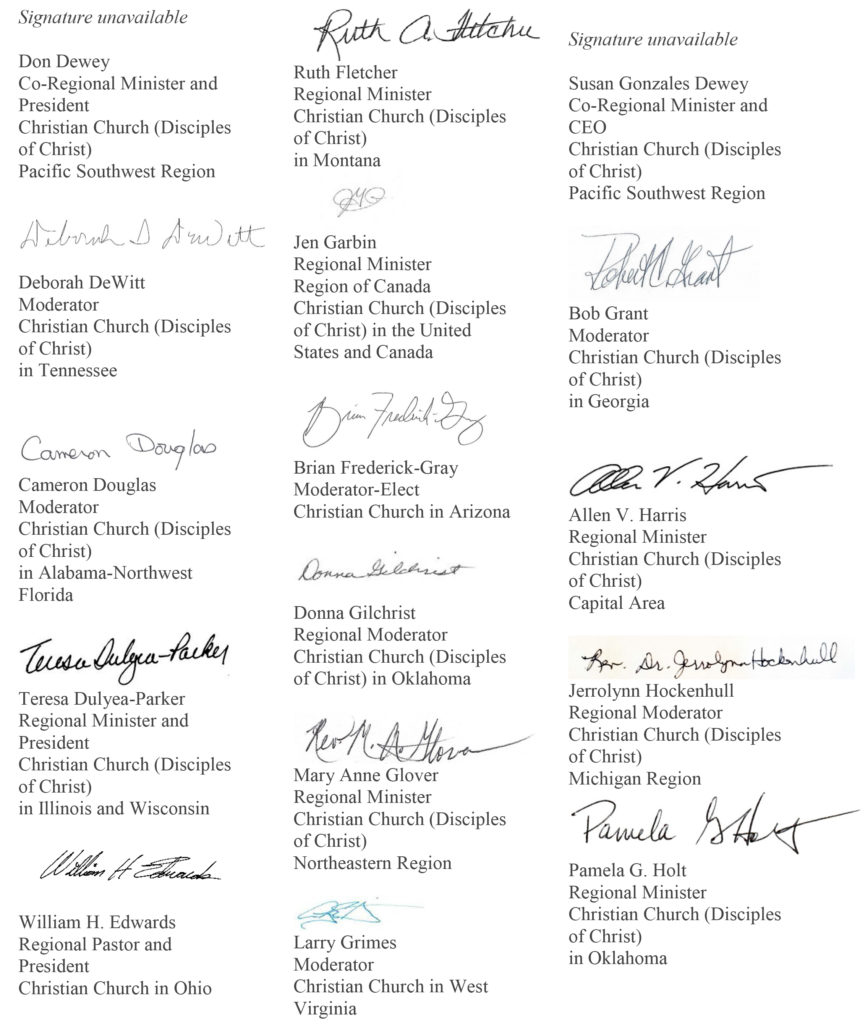 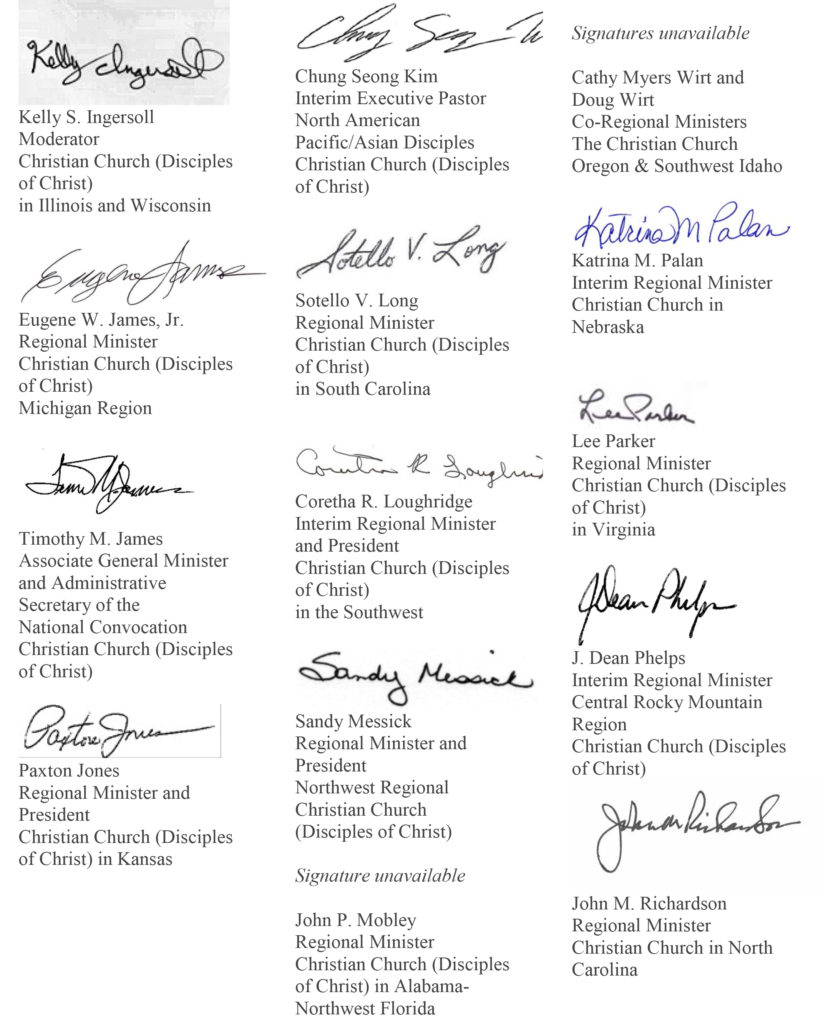 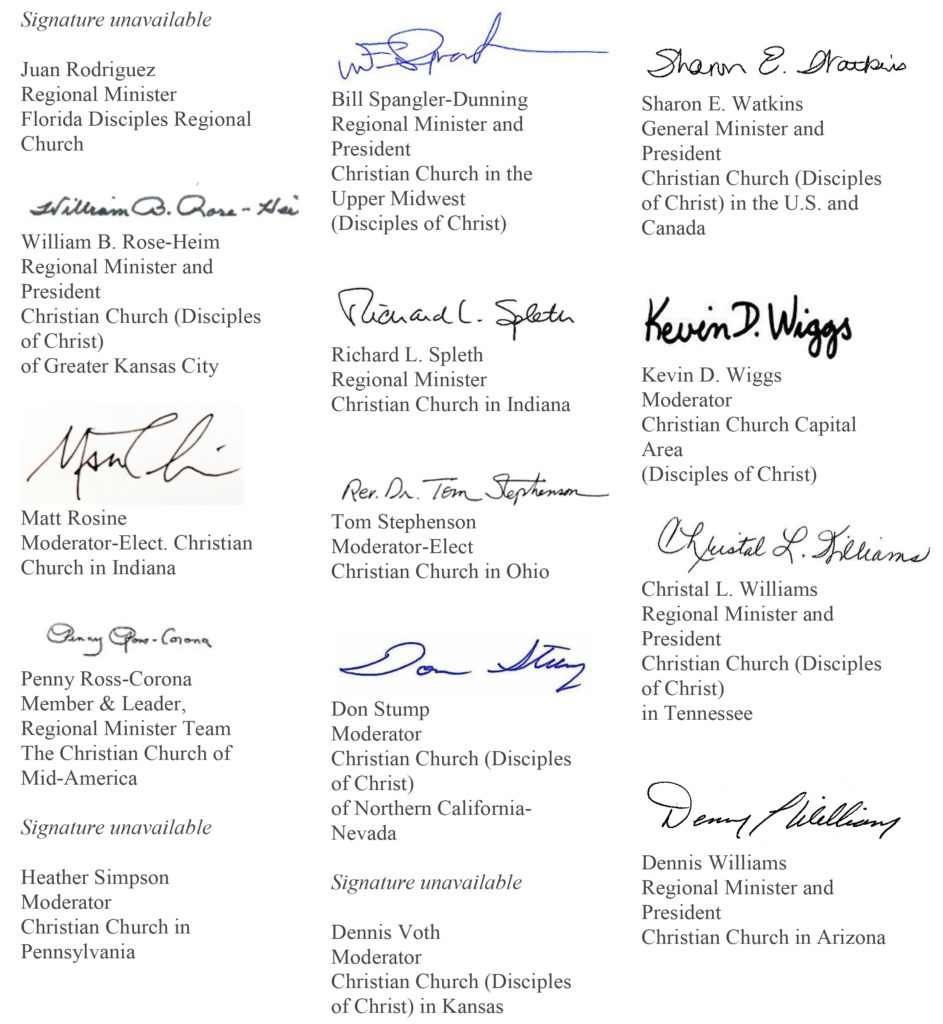