This is the text of Degges’ announcement to the November DHM board meeting in Washington, D.C: 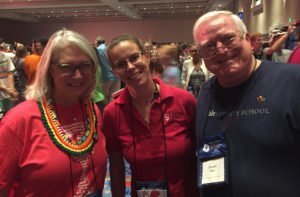 In his President’s Report to the Board of Directors of Disciples Home Missions in Washington, D.C., on Nov. 8, 2016, Ronald J. Degges reported:

I had the privilege to lead a Regional Elders Retreat in Wooster, Ohio, a few weeks back. I met some of the finest church leaders you would ever want to meet. The Retreat was divided into two sections. Section one was entitled: “Beating the Odds: If God is For Us, Who Can be Against Us?” The scripture text cited was from Romans 8:31-39. Hear, in part, what the scripture says:

“If God is for us, who is against us? . . . Who will separate us from the love of Christ? Will hardship, or distress, or persecution, or famine, or nakedness, or peril, or the sword? . . . No, in all these things we are more than conquerors through him who loved us.

“For I am convinced that neither death, nor life, nor angels nor rulers, nor things present, nor things to come, nor powers nor height, nor depth, nor anything else in all creation, will be able to separate us from the love of God in Christ Jesus our Lord.”

I shared with those Elders that we need to find a way to stop the negative, defeatist thinking that has pervaded the life of our congregations and reclaim the fact that through Christ the odds are stacked in our favor and not against us. Let us be, as Leander Keck suggested, The Church Confident.

Section two of the retreat was entitled: “Regrouping for the 21st Century Frontier.” The scripture text cited was from Acts 1: 15-26. The scene is the death of Judas and the need for the community to regroup and fill the vacancy left by Judas’ betrayal and death. Two candidates rose to the top of the candidate pool, Joseph called Barsabbas, and Matthias. The text continues:

“Then they prayed and said, ‘Lord, you know everyone’s heart. Show us which one of these two you have chosen to take the place in this ministry and apostleship from which Judas turned aside to go to his own place. And they cast lots for them, and the lot fell on Matthias; and he was added to the 11 apostles.”

The broken circle of apostolic leadership is restored with the election of Matthias and the mission of the early church continues to touch lives and restore wholeness.

During the retreat I introduced the elders to what I think is the single most descriptive definition of leadership. The definition is attributed to Ron Heifetz. Heifetz says that: “Leadership is disappointing people at a rate they can tolerate.” Old paradigms for ministry are quickly fading. New paradigms are being birthed, sometimes painfully, into existence. The role of the leader is to bring glimpses of the new paradigm to the faithful in a way that invites them to feast on what is yet not, but what is certainly yet to come.

I would like to think that my ministry since my ordination 43 years ago this past Oct. 14, has been one of a faithful leader “disappointing people at a rate they can tolerate,” and leading them into the new paradigm of what it means to be church today.

The great majority of my ministry has been spent in the local parish. It was there I learned to be a pastor and to love the people. Even during times of great distress there was always love for the people. Back in October 2008, I was called to become President of Disciples Home Missions. My service as your President began on Jan. 1, 2009. Disciples Home Missions became my congregation and you became my Board of Directors. You supplied me with a gifted and talented Program Staff and Ministry Associate Staff and freed me up to lead.

Back on April 26, 2016, the Personnel Committee and the Executive Committee of the DHM Board and I had our first conversation about pending retirement. We prayed for each other and for God’s wisdom in determining what timing might be best for both DHM and for me. Since that time Deniese and I have been in prayer about the best time to retire.

Tonight, I share this decision with you so that you can be prepared for the report of the Personnel Committee at tomorrow’s Plenary Session. No surprises on anything we do at Disciples Home Missions, only openness, transparency, and truth.

All I can say is that it is a privilege to serve as President of this most unique and needed General Ministry of the Christian Church (Disciples of Christ). All of my life I have benefited from White Privilege. At an early age I received honors and awards in academics and sports. I traveled throughout Europe and the Middle East studying theology at Oxford University and participating in archaeological digs at Megiddo. I was ordained to the ministry when 19 years old and served my first student pastorate in Possum Valley, Tennessee. Yale University became my theological home and my Master’s degree opened up doors to serve in some of our finest congregations, even as President of Disciples Home Missions. I have been immeasurably blessed!

My ministry began here in the District of Columbia with my ordination many years ago. It is a fitting thing that I announce its ending here. Life always comes full circle.

Now is the time to step aside and open up this position for another one, whom God is now preparing, to take a major leadership role in the life of this church. Leadership is not only “disappointing people at a rate they can tolerate.” Leadership is handing off the baton to a whole new generation. I will do so next August 31 and we together will see what new thing God will do with Disciples Home Missions and with the Christian Church (Disciples of Christ).