General Minister and President Terri Hord Owens offered these remarks at the Washington DC kickoff of 40 Days of Advocacy by the Poor People’s Campaign: A National Call for Moral Revival on Monday, May 14. 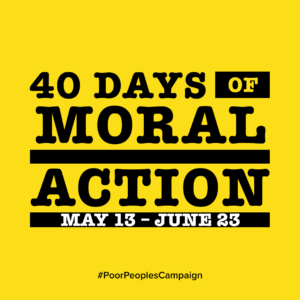 The Souls of Poor Folk audit highlights the fact that nearly 4 in 10 children spend at least one year of their lives in poverty, meaning that there has also been a rise in the number of poor families.  The reduction in anti-poverty programs, from 68 percent of the poor receiving assistance under the Aid to Families with Dependent Children in 1996, to only 23 percent of poor families with children receiving assistance under the Temporary Assistance to Needy Families program, has fed the perception that government programs do not work, and consequently, even more families live in food and housing insecurity. It is a moral outrage that any child or any person,  in this country would not have enough to eat, not have decent housing in which to live, and that any woman is not earning a living wage with which to provide for their children.

The moral shame on our nation is that we do have enough, enough for every family with children!  And we continue to diminish the humanity of those with disabilities, casting them aside, and creating barriers to their health and economic security. As Jesus prepared to teach more than 5,000 on a mountain, the Gospel of John tells us that the disciples told Jesus the people were hungry. Jesus said, “Give them what you have.”  What they had was five loaves and two fish. Jesus blessed what they had, and gave it to them to distribute. They not only ate until every one was full, but there were baskets left over. We think of this story as a miracle, but scholar John Dominic Crossan suggests that it is really a parable about economic justice.

Imagine what we could if we allow Jesus’ love to direct the distribution of our resources. When we manage our resources according to Jesus’ teaching, we have enough! We have enough so that every belly would be full, so that no child is hungry at night or in the morning, so that no mom has to cry herself to sleep at night because there is no heat when the child is sick.  There is enough for school funding to educate our children equitably and well, there is enough for living wages so that hardworking people are whole. There IS enough!  Let us decide as a nation that we will ensure that everyone has enough to thrive! Write and call your legislators, here in DC and around the country! Register, vote and stand up! We cannot rest until everyone has enough!

ACT Now Against Racism video from May 14 march