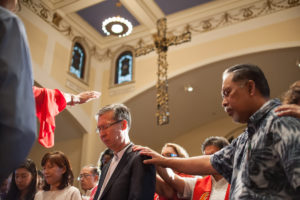 The North American Pacific/Asian Disciples (NAPAD) elected Rev. Chung Seong Kim to a six-year term as executive pastor at their 20th biennial convocation in Portland, OR. Kim has served the past two years in an interim capacity.

The meeting place has historic significance for NAPAD. In 1891, First Christian Church of Portland was the incubator for the first Chinese Christian church sponsored by the Christian Women’s Missionary Society. Rev. Jeu Hawk was a leader in spreading the Stone Campbell movement in the Portland area.

The assembly’s theme, One in Christ, was based on Ephesians 4:13. With more than 15 ethnic backgrounds represented among NAPAD’s congregations, the theme of diversity without dividedness resonated throughout messages from General Minister and President Terri Hord Owens, Division of Overseas Ministries President Julia Brown Karimu, newly-ordained Rev. Tevita Uesi and the Bible lecturer, Rev. Dr. Seong Hyun Park of Gordon-Conwell Theological Seminary. (See photos from event here)

One of the highlights of any NAPAD convocation is the cultural night celebration. Members of the NAPAD community bring music and dance from across the globe, sharing the joy of both folk and formal performances. This year, the Disciples Divinity House at the University of Chicago announced a new scholarship in honor of Rev. Geunhee and Geunsoon Yu. Rev. Yu led NAPAD from 1992 to 2011 with another stint as interim executive pastor in 2016.