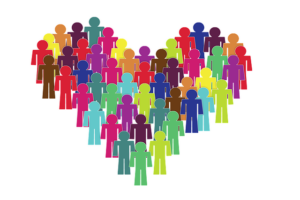 Image by Gerd Altmann from Pixabay

Not too far from Cane Ridge and Paris, Kentucky, North Middletown Christian Church is, as their pastor Rev. Stephanie Moon says, a “modest” sized congregation. But their impact in the community is marked by generous giving to many causes.

In 2018, the congregation embarked on a counting spree. They did not include the contributions the church makes through budgeted items under “Outreach.” These were above and beyond donations, such as crackers and granola bars, underwear, and additional monetary donations as needs arise.

Moon said, “I was recently impressed by the book called Faith on the Avenue by Katie Day. She researched a nine-mile-long stretch of Germantown Avenue in Philadelphia. This road has some of the oldest congregations in the nation. There are houses of worship of various religions, denominations, and ethnicities. She discovered that since the economic downturn of 2008, congregations are doing MORE with FEWER people contributing LESS money. What kind of crazy economy is that? It’s the faith economy. As the nation was tightening its belt, the congregations found ever-increasing ways to be generous—many beyond the offering plate. In fact, although many Philadelphians choose not to worship in any of these communities, they all benefit by the ways congregations contribute to social capital: the network of relationships that help a society function more effectively.”

And so the counting began. Even though the congregation had budgeted $7,000 for outreach, an additional $4,200 appeared from the pockets of the people. Add that to the cans of soup and other foods collected for Operation Food Basket (372), crackers and snacks for the local (food) backpack program (4,527 items), school supplies (3,202 items), eye glasses to the Lions (35), blankets for the senior center and untold numbers of Undie Sunday contributions.

They rang bells for Salvation Army, donated to Girls on the Run and sponsored an alternative giving fair. Special day offerings for Pentecost, Week of Compassion and Reconciliation Ministry were received.

This exercise helped the congregation understand that they were making a huge impact in their community. Worship attendance does not measure the heart and reach of a congregation, as evidenced by North Middletown’s generosity. And who can count how many of God’s children those gifts may have touched?

Recently the Christian Church Foundation did a study of Disciples’ per capita giving overall. Disciples’ total giving has not only kept pace with inflation, it has nearly doubled in real dollars. And that doesn’t even count the countless socks, canned goods and school supplies collected by congregations.

“I am grateful to pastor such a caring and generous church,” Moon said. “While this counting project confirmed my sense that these are giving people, it is also amazing what God can do through loving people.”