The Rev. Caleb J. Lines is Senior Minister of University Christian Church (Disciples of Christ) in San Diego, CA.  The action described was planned by the American Friends Service Committee and the Poor People’s Campaign in partnership with a number of other organizations.

“Now after [the magi] had left, an angel of the Lord appeared to Joseph in a dream and said, ‘Get up, take the child and his mother, and flee to Egypt, and remain there until I tell you; for Herod is about to search for the child, to destroy him.’ Then Joseph got up, took the child and his mother by night, and went to Egypt, and remained there until the death of Herod.”  (Matthew 2:13-15a, NRSV) 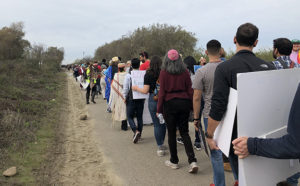 My legs began to get weary as I slogged through the wet mud on an uneven path.  Something had happened that almost never happens in this part of the world: it had rained.  We were marching at an incredibly slow pace, but the point wasn’t to get there fast, it was to journey together.  The deliberate pace was necessary, as people of different ages and differing abilities tried to walk in unison.  The low, mellow tones of indigenous drums kept the pace for us, as musicians strummed guitars, and as we sang together on our way to the US-Mexico border.  We were participating in a planned action to raise awareness about the plight of those in the migrant caravan, just on the other side. 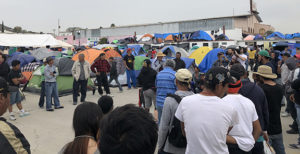 As sprinkles of water began to fall on my head, I recalled what I’d seen just a few days earlier at the migrant camp in Tijuana.  I’d gone to visit with a group of clergy and was horrified by the conditions.  Around 2,000 people were piled on top of each other.  They’d traveled together for over a month, hoping to be granted asylum.  When they arrived at the border, they discovered that neither Mexico nor the US wanted them there.  Now in a camp, all of the meals were being cooked by volunteers on one two-burner stove and there was nowhere near enough food.  As we left the camp, the rain came pouring down and I watched as little children scurried to find a place to stay dry.  Some of the children had joined the caravan on their own and had been “adopted” as a part of this large family.

As I marched, the rain fell again, and I wondered if we would have welcomed Jesus, if he were at the border.  Then I sighed because I knew the answer.  Yet, I found hope in this group with which I was marching, because for the past few days, our congregation had served as the gathering place to prepare for this action at the border.  Hundreds of people from different faith traditions and from all around the country filled our facility to learn more about the march to the border and to receive training on nonviolent direct action for the inevitable encounter with border patrol.  As the trainings came to a close, everyone moved into the sanctuary for a powerful interfaith service, inspiring us for the morning’s march with Rev. Traci Blackmon as our featured preacher. 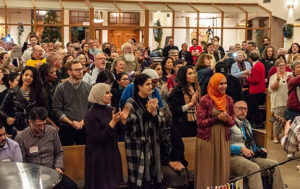 University Christian Church (Disciples of Christ) hosted the interfaith service preceding the march to the border.

Now, all four hundred of us, were just twenty miles south of the church marching from Border Field State Park to the border wall.   When we finally arrived, we weren’t allowed to approach the wall, but we could see people gathering on the other side.  We began waving to each other with armed border patrol agents standing between us.  We started singing, “Rise up my people, my condors, my eagles! No human being will ever be illegal!”  As we sang, I looked at the birds, which flew effortlessly back and forth over the border wall and remembered Jesus’ command to “look at the birds of the air”…aren’t God’s children living in a tent city on the other side of the border of more value?

The Gospel of Matthew portrays the Holy Family as refugees who fled the violence in their homeland and sought asylum in Egypt.  Thank God the Egyptian border patrol didn’t greet them with tear gas.  This Advent, as we prepare to welcome the Christ child into our hearts anew, we must remember that, according the Bible, we should be welcoming him at the border.