In some ways, St. Francis of Assisi Christian Church, in Draper, UT, is like numerous other congregations. They offer a traditional worship service centered on communion, sermons, and music. They partner with local organizations to support the homeless community in their area.

In at least one way, though, St. Francis is unlike most congregations: they meet at the Utah State Prison.

The call to start a prison congregation first came to Rev. Charles Hines when he worked for an organization supporting people fighting addictions. Many of his clients there had been given a choice: participate in a detox program or go back to jail. Rev. Hines also learned about Prison Congregations of America, an ecumenical organization that helps start, and provides resources for, churches in prisons.

He also worked with the Central Rocky Mountain region to become affiliated as a Disciples congregation. 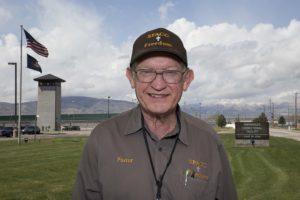 “Nine years ago, I went to the building for our first meeting,” Hines remembers. “I looked at the razor wire, towers around the place, and I prayed, ‘God I don’t know if I want to do this. I might be just as happy in a more traditional church.’ All of a sudden it was like God was in the car with me; I could just feel a powerful presence saying to build a church there.”

Over the last decade, St. Francis has developed a variety of programs to support its participants during, and after, their time in prison. After their weekly worship service, they offer life skills courses and recovery programs. The church also offers a children’s ministry, even though there are no children in attendance. Instead, this ministry supports women who are reconciling with their own children.

Hines collaborates with a variety of community organizations, collecting socks and preparing hygiene kits to give to the homeless. The women at the prison write prayers to go with them, and other volunteers, the congregation’s “missionaries” deliver the donations.

“It’s not us that make this ministry work,” Hines says of himself and his fellow volunteers. “We’re kind of like actors. God has written a script, and we’re just trying to play those roles the best we can. He’s opened doors at the prison that we never would’ve imagined we could open.”

Another important piece of St. Francis’ mission is to support people after they’ve been released from prison. They work with their partner ministry, Epiphany Fellowship, and several local congregations to connect women with mentors and new churches to attend.

This kind of partnership is one of many ways any congregation could serve local prison populations, Hines suggests. “The prisons are a huge mission field right in the backyard of the Church. We all have prisons in our communities we can serve.”

“If we’re going to live the Gospel, we can’t forget the people on the margins…It just seems like Christ would have us go to those that society considers the ‘least of these.’”