Three Disciples Women representatives attended the 63rd session of the Commission on the Status of Women (CSW) at the United Nations headquarters, March 11-22, along with representatives of member states and other UN entities and organizations.

Accredited organizations in good standing with UN’s Economic and Social Council may designate representatives to attend the annual sessions of the CSW. The United Church of Christ is an accredited member and graciously invited Disciples Women to attend as their sister church. Rev. Dr. Pat Donahoo, executive director of Disciples Women, had attended a social justice gathering in Des Moines with the UCC’s Rebekah Choate, where they shared in similar work. When Rebekah received the invitation to CSW63, she extended it to Donahoo and her team. Disciples Women is grateful to a generous supporter who funded their participation.

“This experience was like ‘drinking from a fire hose,’” Donahoo said. “There was so much information to take in that it was difficult to keep up. In combatting trafficking, there were two recurring, highlighted themes: reducing the vulnerabilities of women and girls around the world and addressing demand by, among other things, changing the culture of male dominance to a more equitable understanding.”

The priority theme for this year was “Social protection systems, access to public services and sustainable infrastructure for gender equality and the empowerment of women and girls.” Additionally, there was a heavy focus on the 17 Sustainable Development Goals adopted by all United Nations member states in 2015 and their intersections with gender equality. 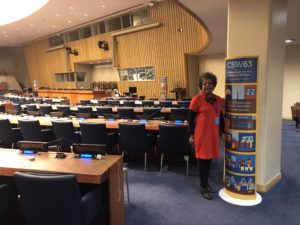 Marilyn Williams, president of International Disciples Women, reflected: “This was an awesome experience with over 9,000 women and girls from all over the world sharing and willing to contribute their talent in the fight for gender equality, but, moreover social protection for women and girls. As we ended this breakthrough, the aftercare and solution must be ongoing. We must utilize and spread all we have learned; only then will we have achieved our goals.”

Gender equality is the state of equal ease of access to resources and opportunities regardless of gender, including economic participation and decision-making; and the state of valuing different behaviors, aspirations and needs equally, regardless of gender. Gender parity is a statistical measure that provides a numerical value of female-to-male ratio for indicators such as income or education.

The active participation of nongovernmental organizations (NGOs) is a critical element in the work of the CSW. NGOs have been influential in shaping the current global policy framework on women’s empowerment and gender equality. They continue to play an important role in holding international and national leaders accountable for the commitments they made in the Platform for Action determined at the Beijing 4th World Conference on Women in 1995.

In addition to official meetings, there are over 400 simultaneous meetings that happened during the two weeks at churches and other facilities within about a 10-block radius of the UN designed specifically for NGOs.

Rev. Chesla Nickelson, program director and merger staff for Disciples Women, summarized her experience: “Attending the UN CSW63 was a reminder that not only are we not alone in the fight for gender equity and the end of human trafficking; there are literally women all over the world doing the impactful work of liberating and empowering women and girls in innumerable innovative ways with minimal resources.  UNCSW63 has given me hope and energy to run on.”