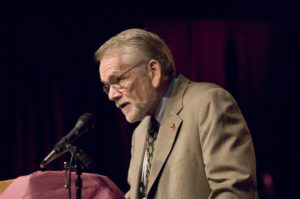 In addition to his work in the general Church, Hobgood was regional minister in Arkansas and the Capital Area and most recently pastor of Bethany Beach Christian Church in Delaware. The author of books such as Welcoming Resistance: A Path to Faithful Ministry, Once and Future Pastor, and Born Apart, Becoming One: Disciples Defeating Racism, Hobgood was a tireless voice speaking up against racism, making that a theme of his term as general minister and president.

“We were so blessed to have him as a leader in our Church. I was blessed to be in pro-reconciliation/anti-racism training with him several times,” said current general minister and president, Rev. Teresa “Terri” Hord Owens. “His leadership in a transitional time called us to faithfulness in our witness as a pro-reconciling anti-racist Church.”

Hobgood’s daughter, Dr. Laura Hobgood, said “His anti-racism and justice work was always at the heart of his ministry.” She noted his long affiliation with the Disciples Center for Public Witness as well as the mission trips his congregation took to assist with rebuilding after Hurricane Katrina.

Born in July of 1936 in Lotumbe in what was then the Republic of Zaire, Hobgood was the son of missionaries. He received his bachelor’s degree from Transylvania College (now University) and his divinity degree from the College of the Bible (now Lexington Theological Seminary) while serving several Kentucky congregations in the late 1950s. He earned his doctor of ministry from Lancaster Theological Seminary in 1982.