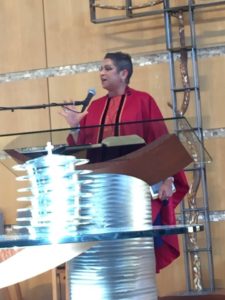 She called those present to an urgency of action for justice and righteousness. Preaching on Amos 5:21-25, Rev. Owens reminded the worshippers “Why We Can’t Wait,” referencing the title of a book by Rev. Dr. Martin Luther King, Jr. She called the church to accountability when it aligns itself too close to worldly power, stating, “that’s when the church goes wrong: when it derives its power from empire!” She also challenged her listeners by saying, “We have to be loud enough for truth and justice so that our children will say, ‘I want that!'”

The $2,100 offering from this year’s event will be divided equally between the United Christian Parish food ministry for the homeless at the Reston Hypothermia Prevention Center and the Disciples Center for Public Witness.

The Rev. Nathan Hill, senior pastor of University Christian Church, Hyattsville, and one of the core trainers for the Disciples of Christ Pro-Reconciliation/Anti-Racism Training program, was honored with the CCCA “Bridge Builder Award.” This was given to him for his work in promoting peace, justice, and equality and fighting systemic institutional racism. Members of his family and congregation joined him. Oscar Haynes was also granted the 2018 award, posthumously, at the dedication of the Oscar Haynes exhibit of the Disciples of Christ Historical Society at National City Christian Church this past November. 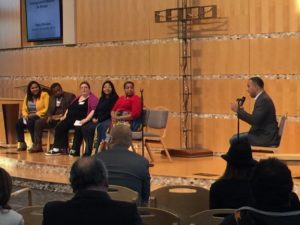 The regional event included a panel for young adults, titled, “Inspired By A Dream: Where Do We Go From Here?,” moderated by Chris Lawrence of NBC4 in Washington, DC.

The regional event also included a Social Justice Resource Fair, which featured organizations committed to action and advocacy for those disenfranchised and at risk. The Disciples Center for Public Witness, the Disciples Refugee & Immigration Ministries, and ARISE, a campus ministry at George Mason University, participated in the fair.

The event was hosted by United Christian Parish in Reston, VA, an ecumenical congregation from four traditions: Disciples of Christ, United Church of Christ, Presbyterian Church (USA), and United Methodist Church. The service was filled with music, prayers, the words of Dr. King, and scripture.

The MLK Tribute & Action event was planned by the Capital Area Commission For Congregational Life. The Rev. Dr. Rosetta Robinson is Director of the Commission. Joe Michaels, one of the Capital Area Region’s seminarians, helped to lead the Young Adult Panel. Menda Ahart oversaw the local arrangements and James Dean organized the Resource Fair. Both are members of United Christian Parish. This annual event is funded in part through the Reconciliation Ministry special offering received each fall.