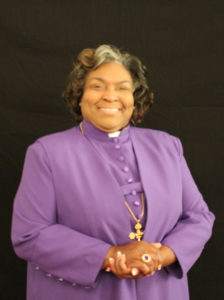 The “new” settled regional minister for North Carolina is a familiar face to that region. This bridge-builder is the first woman and first African American to lead the region. Bishop Valerie Melvin will be installed on June 30. She has been associate regional minister in the region since 2007.

“I am continuing the bridge-building of my parents, the late Bishop James Lee Melvin and Mother Ada Knight Melvin, and others across denominational and racial lines. I was raised to believe that each branch of this Disciples movement is culturally and theologically diverse, but we are one body because of Christ. And when one person in the body makes a step forward, it is for the benefit of all.”

In addition to the 20 years Melvin served as a public school teacher, she has cultivated young people and communities along the way through the Stop the Funeral movement with Rev. Dr. William J. Barber II, the Corner-to-Corner project, and, most notably, the mobile Christian education ministry, Victory is Inevitable.

In 2014, Life Changing Ministries International Fellowship (LCMIF) members became aware of the lifechanging work Melvin was doing through Victory Is Inevitable Ministries as well as her work in the North Carolina Region, her congregation (First Christian in Reidsville), her involvement with Disciples Women, membership on several ministry boards, and mentoring more than 20 women in ministry. LCMIF conferred on Melvin the title of bishop as she continued to learn and serve, building bridges in her community, between the Christian Church (Disciples of Christ) and the Churches of Christ (Disciples of Christ) and between the various expressions of the church universal. She has also received the Liberation Award from the National Convocation.

“As ministers of the gospel we simply serve. We understand our reward is not given to us by people, but by God,” she said.