by Rev. Dr. Timothy M. James, Associate General Minister and Administrative Secretary of the National Convocation of the Christian Church (Disciples of Christ) in the United States and Canada 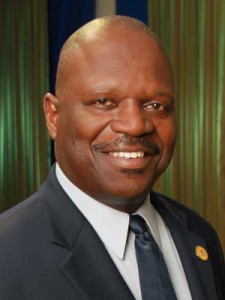 Poverty tours of the Poor People’s Campaign: A National Call for Moral Revival

Saturday morning, April 27, 2019, I, with the company of my wife Joyce, joined the National Emergency Truth and Poverty Tour.  I was inspired by the purpose which is: “To shine a light on the plight, fight, and insight of the poor in Cincinnati and real national emergencies.”  It was encouraging to know that we were touring in Cincinnati, Ohio, while other tours were taking place in 10 other states. This is a movement that has caught on and with continued commitment, solidarity, unity, collaboration and prayer can’t be stopped.

The National Emergency Truth and Poverty Tour is designed to shift the false narrative to enable the truth of the real national emergencies to be told and heard.  Each tour gives the riders the chance to hear first-hand the stories from people who live in environments that are poverty stricken, rated high in crime, drug infested, food deserts, lacking decent transit systems, no hospitals and in need of employment and educational opportunities for students.

Cincinnati was the city where I served as a student associate minister in local congregation during my first year in seminary.  Not being a Cincinnati native, and the short time I served, I was completely unaware of the communities of Winton Hills and Price Hill. These areas have a long history of poverty and crime. It was pointed out that in Ohio, 41 percent of the population lives at or below the poverty level.  In Cincinnati, 36 percent of the population live at or below the poverty level.

We heard personal stories that were most impactful.

The stories made the tour both informative and impactful.  It is clear to see how knowledge is power. The powerless poor need their plight, fight and insight lifted to the national stage for the attention of leaders and policy makers. The national emergency is poverty, its systemic and is likened unto darkness. Jesus said, “And this is the condemnation, that light is come into the world, and men loved darkness rather than light, because their deeds were evil.”  (John 3: 19). The ignorance of the pervasiveness of poverty coupled with the policies that maintain poverty’s status quo, need to be lit up and shouted from the roof tops. This was a positive experience.  The comradery and collegiality was a bonus.

Rev. Dr. William Barber, II and Rev. Dr. Liz Theoharis would be proud and pleased with the enthusiasm and preparation the Ohio Campaign brought to the National Emergency Truth and Poverty Bus Tour.